Tumblr is back. What does that mean for marketers? – Sprout Social

Send us an email
Send us an email
Search the Blog
Written byby Katie Woods
Published on November 21, 2022
Reading time 5 minutes
Share
If social media platforms were teens from an 80s comedy, Tumblr would be the weird–but cool–kid. You know the one. Seemingly unapproachable but actually super nice. They’re fixated on niche interests and the jokes they create. Plus, they have impeccable taste in music and clothes (just not the kind of music and clothes you think you could get away with). From 2007 to the late 2010s, Tumblr had a lock on the alternative social media market. They lost their way for a little, but it’s clear Tumblr is back with an understanding of what its audience wants and the willingness to execute on it.
welcome back 🙂https://t.co/ixbAwSlMkB pic.twitter.com/9sNyCMlsX4
— tumblr dot com the website and app (@tumblr) November 14, 2022

Tumblr still feels like a relic of a different time. The platform’s interface essentially hasn’t changed since the 2010s. But that’s exactly what people like about it. The reverse chronological feed is the anti-algorithm–you see exactly what you’ve followed and basically nothing else. Tumblr feels free.
In a world where platforms are more and more defined by the type of content you consume and create–Twitter is for text, TikTok and YouTube are for video, Instagram is for all things visual–Tumblr’s environment invites post diversity. You might see a GIF next to a text post next to an image. And users–especially younger users–are responding to that freedom. Of the 135 million monthly users visiting the microblog site, 48% are Gen Z. That number might be even larger now, since Tumblr had a 96% adoption surge between October 27, 2022 and November 17, 2022.
The enthusiasm for Tumblr is spilling over into other platforms. According to Sprout Social’s Listening Tool, between October 4, 2022 and November 17, 2022, there were over a million Tweets about Tumblr.
With all of the renewed interested in Tumblr, marketers might be considering the platform for their social strategy. But before brands can decide if Tumblr is right for them, they need to understand the nuances of the platform.
If other platforms are defined by their content type, Tumblr is defined by its culture. Social media platforms are inherently cultural experiences but Tumblr feels different. Twitter is known for the spicy quote Tweet response while Instagram is known for aesthetically pleasing grids. But Tumblr, with little rules about content type or subject matter, is known for being weird.
Features like reblogging create viral inside jokes that make no sense out of context–and sometimes very little sense with context. The result is a strange, but pleasant, fever-dream-esque experience. Tumblr as a brand has fully leaned into where its audience has taken the platform. 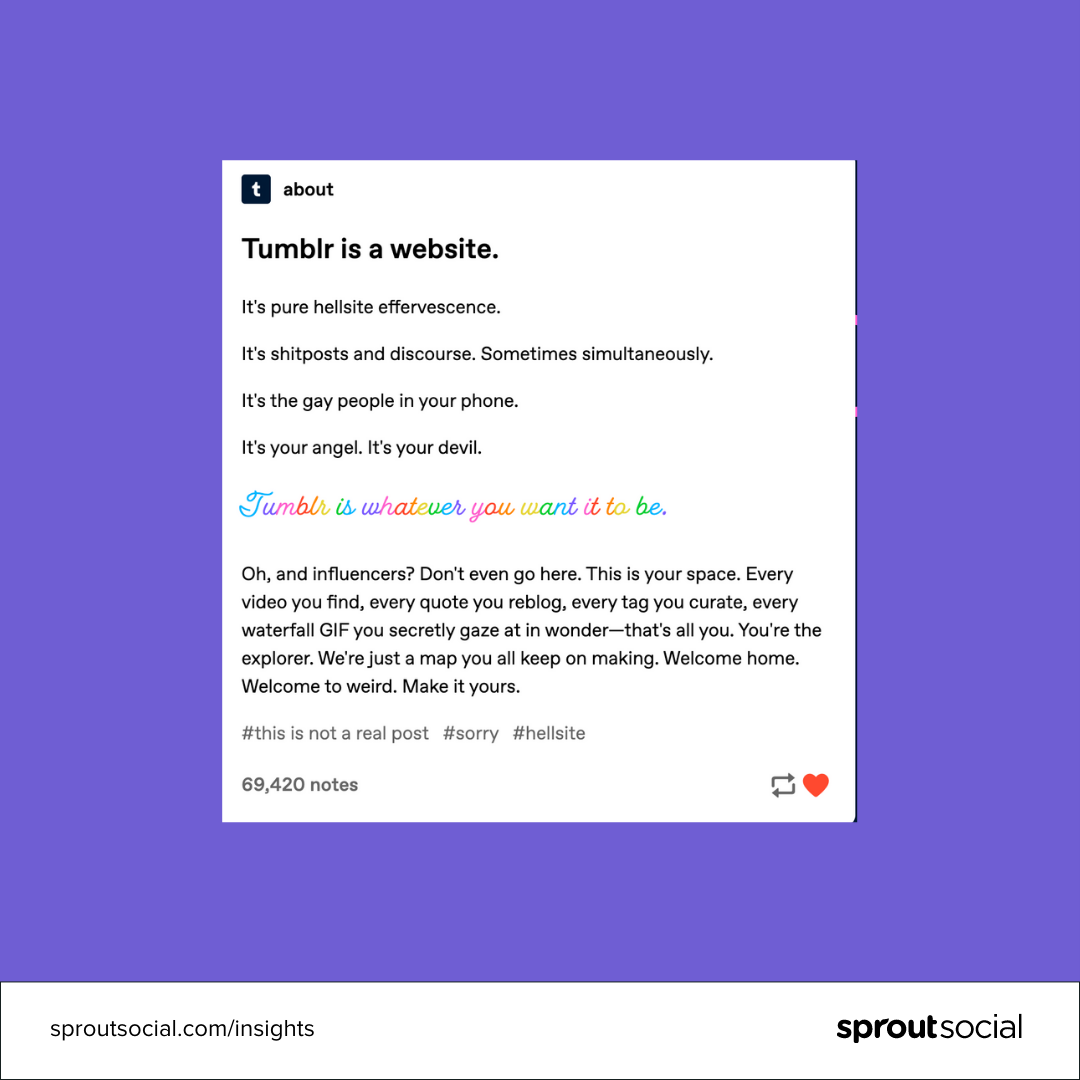 Tumblr likes poking fun at itself. Site users have lovingly nicknamed Tumblr the “hellsite” due to its chaotic nature. Instead of making changes to the platform to curb the chaos, Tumblr recognized that its users want more of it and is more than willing to deliver. The platform is so devoted to its culture that it created a blog called “Hellsite High” for new users to learn how to assimilate and contribute to the culture. The tip blog covers everything from best practices to keyboard shortcuts to avoiding burnout. It’s just the type of tongue-in-cheek content that’s made Tumblr a cult favorite.
tumblr: your favorite liminal space https://t.co/WzAvUweEF3
— tumblr dot com the website and app (@tumblr) November 13, 2022

It’s hard to imagine retail products for most social media platforms. But Tumblr isn’t most platforms. Tumblr users don’t just love the content the site facilitates, they love the site itself. Tumblr is monetizing its users’ devotion with an online store.
Some products lean into inside jokes, like a pair of shoelaces with a Supernatural reference–a staple fandom on the platform. Others, like physical verification pins, poke fun at common social features that don’t exist on Tumblr. There are also products that comment on the state of Tumblr, like a sold-out bandanna that says “I grew up on Tumblr” or a branded notebook with “Welcome back to weird” emblazoned on the back. These products are absurd, but so is the platform. It works somehow.
Cannot even begin to tell you how much I need this pin @tumblr https://t.co/gaXzsJVHQr pic.twitter.com/CAH9RNAcUF
— Stardust&Melancholy (@MelancholyPhoto) November 14, 2022

If you’re a marketer, you’re probably wondering how you can leverage Tumblr’s return. The answer is a little complicated. Tumblr can be an excellent avenue for the right brands but it has to make sense for yours. Here are some tips for marketing on Tumblr.
Tumblr has never been known for its moderation. Their method relies on user tags for posts that might offend, like nudity or sensitive subject matter. With that being said, brands need to seriously evaluate their risk tolerance with Tumblr. Even if your posts are squeaky clean, the reverse chronological algorithm means they could show up next to something more explicit in your audience’s feed. Tumblr is best for edgier brands with a more relaxed take on brand safety that wouldn’t be negatively impacted by such juxtaposition.
Brands should also evaluate whether their audience is even on Tumblr. Tumblr’s audience skews younger and more alternative. Fandom content, cult favorite products, clothing lines and niche interests will do best on Tumblr. If you’re selling luxury jewelry or baby products, your social strategy is probably better served elsewhere.
Tumblr has never been good at ads. They’re clunky and because not all brands fit the Tumblr aesthetic, they’ve never been a huge revenue driver for the company. The platform even rolled out a premium ad-free subscription in early 2022, meaning power users won’t even see your ads. Which means your organic posts have to be perfect.
Tumblr’s unique approach to the algorithm means that your followers will see more of your posts than they would on other platforms, making this the perfect space for organic posts. When you add in the freedom of post type Tumblr is known for, it’s a winning marketing combination.
But be cautious. Tumblr users are some of the savviest social media users out there–and consumers rank authenticity as the second most important factor to them on social. They spend a lot of time online and see a lot of advertisements. If the content isn’t authentic and interesting, they’ll see right through it. Spend time on your Tumblr social strategy to make sure it resonates.
Tumblr is endearingly strange. And that makes it fun. Tumblr isn’t the place for buttoned-up ads or HD product visuals. Tumblr is a place to have fun with your marketing. Get weird. Reblog slightly unrelated posts that your audience might enjoy. This is an opportunity to put your brand personality first and your product line second. Who knows, you might just become the next viral inside joke.
Social media is unpredictable. Most people would have said Tumblr had about as much chance for a comeback as Napster, but things change constantly. As marketers, we have to be aware of those changes and be ready to shift strategy on a dime–when it makes sense. Evaluating whether or not an emerging platform is right for you is tricky, but it’s an important aspect of your social media strategy.
Want to learn more about new platforms? Check out this article about BeReal.
Katie Woods
Katie Woods is an Editorial Writer at Sprout Social where she analyzes social trends and best practices to help social and business leaders grow. Anytime she isn’t writing, she’s attempting to build something or being way too involved with her dogs.
Read all articles by Katie Woods
Join 70,000+ professionals and become a better social media marketer. Get social media resources and tips in your inbox weekly.
Sprout Social helps you understand and reach your audience, engage your community and measure performance with the only all-in-one social media management platform built for connection.
© Copyright 2022 Sprout Social, Inc. All Rights Reserved. Privacy | Terms | Disclosure Policy | Cookies | Do Not Sell or Share My Personal Information