In an effort to help Pinterest creators better reach their wider audience across social media, the company today is launching a new feature for its Idea Pins — its video-first new Pin format introduced last year as an attempt to catch up with the social media industry’s shift from static images to video. Now, Pinterest says its creators will be able to download and share their Idea Pins across social channels, including Facebook, Instagram and others.
Idea Pins, while meant to help Pinterest be more competitive with TikTok and other short-form video experiences, aren’t just videos. Instead, they’re more like a mix of Stories and video, each with up to 20 pages of content which you can tap through like a Story. That content can include either a static image or a video, optionally annotated with text and graphics. Users can scroll through the various Idea Pins from creators they follow in a vertical TikTok-like feed.
With the launch of Pin Sharing, creators will first tap the “FB Stories” or “IG Stories” icon in the share menu, which will kick off the Idea Pin’s download. The content will then be saved as a watermarked video that stitches all the Idea Pin pages together, then ends with a card that displays the creator’s name and Pinterest username — a format that mimics TikTok’s download option. When the download finishes, Pinterest will redirect the user to the Facebook or Instagram app with the Story creation flow open and the watermarked Idea Pin video ready to be further edited and posted. 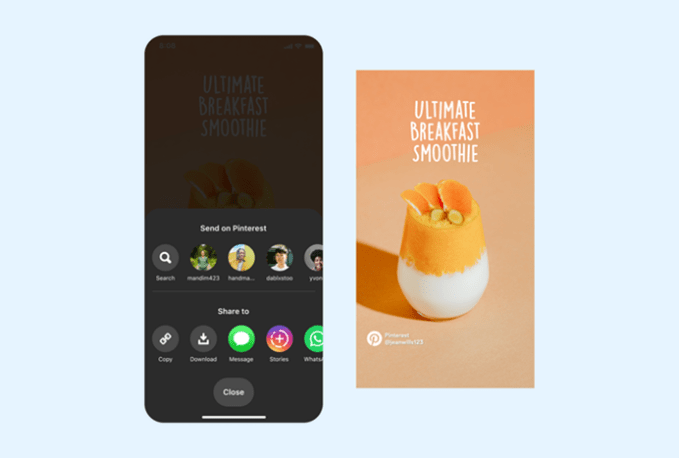 Image Credits: Pinterest
While the integration with Facebook and Instagram is built-in, Pinterest notes the download option will still allow creators to share to other platforms as well, including popular destinations like Snapchat and TikTok.
The sharing feature would allow creators to market their Pinterest presence across social platforms, luring their audience back to Pinterest where they may be using the site’s new tools to monetize their short-form videos. On Pinterest, creators can use Idea Pins to make content shoppable through affiliate links and they can partner on paid brand partnerships, much like they can do on other platforms, like TikTok and Instagram. They can also earn money by participating in challenges issued by Pinterest as part of the company’s $20 million Creator Rewards fund in the U.S.
Watermarked videos could help Pinterest’s creators gain more views for the content originally produced for Pinterest and help them grow their following, but it’s clear that Pinterest also hopes that the videos will serve as a marketing tool for Pinterest itself.
The Pinterest site was established as an image pinboard back in the earlier days of the web, as a place where users would save ideas, like things they want to buy, recipes they want to cook, home décor plans, travel inspiration and more. Pinterest then tried to connect those ideas to commerce, by working with online retailers and merchants to advertise to Pinterest users and integrate their content. But ultimately, video has proven to be a much more impactful shopping tool than static images.
At a recent creator event, for example, TikTok announced that 48% of its users immediately purchased a product they saw on the platform at some point — a phenomenon so prevalent, it’s even become a saying: “TikTok made me buy it.” It also said that 67% of TikTok users were inspired to buy at a time when they weren’t even on the app to shop.
Though Pinterest’s watermarks may help reach the creators’ own audience through Stories, other platforms will likely downrank content in their algorithmic feeds if it contains a watermark. Instagram has outright said it will use this as a signal to downrank content in its Reels tab, in fact.
Pinterest says its new Idea Pin download and sharing features are rolling out today to all users.